Yes, it's a theodicy. A failed one, but a really good effort. 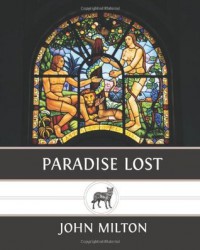 An epic poem in blank verse. Yes, it's a theodicy. A failed one, but a really good effort. It was surprisingly readable. Maybe because the Latin sentence structure doesn't bother me, since in Polish parts of speech can freely move around the sentence. And there's an awesome audiobook I've found. So much fun!

I will not dive into all the details, but in short: it's a re-telling of the story of Adam and Eve; the original sin and, well, the loss of paradise. Milton added some scenes, some dialog for the whole thing could serve his purpose. He infused it with puritan values (Adam and Eve work 6 days a week in paradise, no joke) and endorsed in it inferiority of women (at least intellectual 0ne). Which kind of made me want to throw a shoe at him, but it's mean to attack a blind like this, you know. Because he had been blind for quite a while before 'writing' this poem. He had to arrange passages in his head, memorize them and dictate them to someone. How homerian of him. (Now I have a new saying: Blind like Milton. ^^ Deaf like Beethoven was getting old, good to have some fresh material).

WARNING! Thinking about this book may result in an existential crisis! Use with caution!