The Faceless Ones (Skulduggery Pleasant, #3) 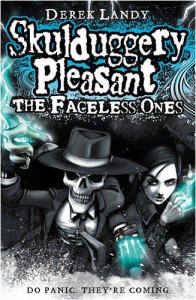 Word count: about 70 000
Rating: I’ll finish you like a chocolate cheesecake!

*The rating is somewhere around 3,75 for this one

Oh yeah baby! They bring the sexy back!

Stephanie is a teenager now. She’s 14 and it shows ^^ (in a good way). It’s kind of cute to see her so certain of who she is and what is an appropriate course of action. She runs her life and refuses to see any fault in it (avoiding boring, trivial things like school and sending your reflection instead is normal for her. But let’s be honest – who could resist the temptation!) Yet we see some doubt creeping in. Somewhere in the back of her mind there it lurks and from time to time throws a stuffed penguin in her face. And for a moment 'awkward' comes into view (and then with athleticism he doesn't poses grabs the said penguin and runs with it. Far.) It’s really nice. Derek Landy has some magical powers of projecting characters age through dialogue.

“People who follow rules do not come to me. Which explains why I speak to both of you with such regularity."

"Detective, have you ever considered the fact that violence is the recourse of the uncivilized man? "
Skulduggery looked back. "I'm sophisticated, charming, suave, and debonair, Professor. But I have never claimed to be civilized."

"Here's how it really works," Tanith told him. "Both sides start out playing fair. Then one side double-crosses the other. Then the other side springs their double-cross. Then the first side reacts accordingly."
Fletcher nodded. "So it's all about how many double-crosses you have?"
"Exactly, and the side with the most double-crosses wins."

"After this, what say you and me go for a coffee or something? You'd really like me if you got to know me. I've known me for years and I love me."


The Faceless Ones is certainly a step up. Landy is on top of it (full control, the plot submitted to him completely and willingly, and boy, does he use that opportunity to have his wicked way with it!). Yes, we are still stuck with idiot villains trying to bring back The Faceless Ones. Yet their motives are presented in a believable way (more than before, certainly). They are a bunch of misguided lunatics, each one with an energy of a humming bird and a ‘can do’ attitude of a car sales man.

So if Nutty Black Nuts (sounds like an emo band XD) are trying to destroy the world who’s going to save us all? It’s a bird! It’s a plane! Nope, it’s a pissed off sarcastic, charming skeleton with an amazing sense of style and his cute sidekick with an attitude and penchant for adventure (and trouble). Together they’ll kick ass. Right?

Not exactly. Yes, Stephanie is even better with her magic and since she’s ‘oh, so special’ with her ancient blood… Yep. Boy, does she grow in the power department. There is a little bit more going on here. Secondary characters became more prominent. Which is nice. We even hear some more about the world and magic and how it’s all organized. Yet the victory isn’t easy nor straightforward. There are traitors messing things up and we don’t get to see the whole picture until the very end. There is far more struggle than in previous books.

There is also more of a set up for next books. Things happening outside of a main plot. Hints dropped. Unresolved situations. Just... More.

I did still have some problems though.

The most important thing – Derek Landy goes over the events far too quickly. Not enough depth, not enough detail. Especially when it came to the final fight sometimes it felt like reading a summary.

I also didn’t like that everybody always talk about how scary and powerful Skulduggery is, but we are never really shown. I want more form him!

Over all it’s a pretty good book with a more intricate plot (yes, same story, but better execution) and lots of fun. It kept me interested all the way through, the final fight was exciting, and the ending… That was really cool. Nice one. Really nice one. Can’t say more without spoiling much. Good people die and world isn't all sunshine and blueberry muffins. Derek Landy delivers.

*There were some scenes that made me so sad! Mr. Bliss has been special to me from the get go. Even though we see very little of him, I kind of like that character. And when he screamed:

"My sister?" he snarled, waiting for Krav to straighten up. "You tried to kill my sister?"

Krav swung a punch. Bliss closed his hand around the fist and squeezed, and Krav roared as all the bones in his hand were crushed.

Bliss punched him and Krav hit the opposite wall, cracking it. "My sister is the only family I have left!"

I connected with him. Before, he has been controlled, strong, grounded, quiet, and I liked him, liked his unwavering sense of right and wrong. But here we get to see emotions for the first time. And it hits. It was a tiny part of the book but, I know, but it mattered to me. SPOILER ALERT /SPOILER