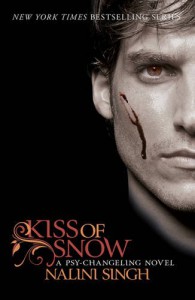 I’ve been waiting impatiently for that particular book since the very beginning. The expectations were quite extremely high and I’m happy to say, they’ve been met. That instalment is almost 50% longer than previous ones – and that makes me insanely happy!

It won’t be a long review as there isn’t much to say. Well, apparently I’m getting better at writing positive reviews. I need to read some crappy books to rant and find my balance (I don't even remember how a bad book looks like). Currently I’m in a happy land and don’t plan to come back any time soon. SIENNA AND HAWKE! TOGETHER! MUA HA HA HA HA HAAAA! I can die happy (but first let me re-read that).

CHARACTERS
Female lead: Sienna
Badass - that is a key word.

b) She stands up for herself.

c) She’s really devoted to people close to her, they matter. That is one character that certainly is NOT selfish.

e) Accepting her fate? That is cool, but how about fighting nail and tooth to change it? Better? I thought so.

f) And remember kids, go out with a bang!

g) She confronts her partner without being whiny and needy. I didn’t think that could be pulled off. Usually if a male cannot give something to a female she tries to overlook it for a while, pretends to accept it but then throws a tantrum. Sienna doesn’t. She says what she has to say. Once. And then she doesn’t take it back, doesn’t apologize, doesn’t constantly bring it up to convince bully her man into what she wants. *applause*

h) She is innocent in a way but experienced in the other. A winning combination of sweet, young, serious, lethal, realistic, optimistic, and stubborn.

She may be a virgin, but she is very sensual. It’s important to remember she had a crush on Hawke since day one, practically since she met him. That significantly complicated things. Her feelings were awakening; she had no experience, no guidance and an awful lot of lethal potential to keep in check. When it comes to human relations in general she’s extremely vulnerable and inexperienced. At the same time she had an extreme ‘childhood’. That dissonance between her raging innocence, cold skills and composure of a seasoned soldier and unshakable determination make her fascinating. She is exactly what she is supposed to be.

Male lead: HAWKE bitches!
*swoons* *drools* Do I even need to comment? I suppose I do. Hawke is a great character. He’s multi dimensional for starters. We get the usual set: powerful, sexy, good in bed, possessive, protective. But it is spiced up with things like his protectiveness of the whole pack. We see him interact with many different wolfs. It’s great how he gives everyone exactly what they need: he’s a military leader, voice of authority but also a friend, family; I love his interactions with the pups, for example. He can be playful, has a temper, but is not an asshole. He does occasionally screw up, but not in a ‘I wanna kill you, you dumb shit’ kind of way; more like ‘you are human and that makes you even more awesome and interesting, let’s have sex!’ kind of way.

He fights his attraction to Sienna, but unlike Indigo (no, I’m not getting over that soon) he has good reasons for it:

a) She is quite a lot younger and he known her as a kid. It’s a difficult transition. She was too young, now she isn't. Takes a while to wrap your mind around the concept.

b) He knows she’s innocent and doesn’t want to push himself onto her, especially since…

c) …he believes he cannot get mated, ergo will not be able to give her all she deserves. For changelings it is a big deal.

Of course Sienna doesn’t take it lying down. And unlike Indigo he doesn’t spend the whole book running in circles. They are moving fucking forward! Hawke constantly has his views of Sienna challenged in the most awesome of ways.

It's also worth mentioning that she is nervous and he doesn't just pounce her. The pressure was building. Things were slowly changing, progressing. No sudden jumps between innocent virgin and rough kinky sex an hour later. He handled her well. She took him on splendidly.

* I've heard some people had a problem with age difference between Sienna and Hawke. First of all it's not such a big difference. He became alpha at 15, now he's maybe 30? Something like that. That puts a little more than a decade between them. Your argument is invalid.

Second of all I've always liked older men. I've never dated a teenager in my life (even when I was one). They are despicable (sorry about that. Truth hurts). USA has stupid laws about paedophilia. Most sane countries set the line at 15. Sienna is 19. Shut the fuck up. He could be in his forties of fifties and I'd still dig it.


PLOT
And here we come to my only problem. There is more of a plot than in the previous book (which set the scene) and yes, we do get epic fight (in my imagination, in reality it took only a few pages) at the end BUT! Not enough action. When I saw how many pages there are I did a little grand happy dance. I thought it means more action without cutting back on romance. Instead we get… almost pure relationship driven book? Yep. You’ve heard me. Is it bad? NO, it’s a good romance. I just really love this world and amazing possibilities for action it presents!

Did it bore me? Nope, not for a minute. But sometimes we move from one intimate scene between Sienna and Hawke straight to another with not enough breathing room.

What redeems lack shortage of action (mind you, it’s not nearly as bad as in the previous book. There is a plot and it has a direction. Relax.)

a) There were some fun world building facts concerning Psy.

b) Sacha and Lucas

c) Walker and the rest of Lauren family.

f) Judd! Because you can’t go wrong with him!

g) The absolutely awesome dynamics of Sienna – Hawke relationship. They do more than just make out. Example: they have conversations about their pasts (don’t you dare roll your eyes! Those were amazingly exciting fragments that substituted for action and fed the drama(alpaca) ) I love how their relationship is resolved, the balance they’ve found.

h) Pretty much all retrospective pieces were interesting (for people that are emotionally invested in those books). And there were more than just Sienna’s and Hawke’s.


I REPEAT: the only problem I had wast that I wanted more action.

The ending is… All sunshine and rainbows. Seriously. It wraps up so nicely it’s sickening (almost, would be if it wasn’t already full of win – Sienna, you showed them!). You practically expect to read the words ‘and they’ve lived happily ever after’. It isn’t bad. In those books I want a happy ending, but seriously? (view spoiler) Convenient much? But I was drunk on all the happy inside of me so it actually made me feel good (I need to see a doctor… Where is my darkness? Bring me my darkness.)

One more thing, I think that everyone should be waaaay more impressed with Sienna (ungrateful fuckers *mumbles*) She was like a jedi ninja on a dragon. One Psy to rule them all and that kind of stuff.

I actually can't wait to continue with the main story line.


I think Hawke and Sienna are my favourite pair (I'm a sucker for Sienna's super powers and whole Lauren family's background. I regret nothing), but it wasn't the best book. Mercy & Riley stole the perfection of romance + action + multi layered plot + a lot of things going on outside of a main story. Kiss of Snow is pretty straightforward and focused (have I mentioned it doesn't have enough action?) I believe I did. Still it had me grinning like a mental case.