Heart on a Chain 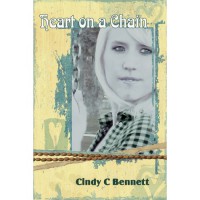 It's actually 3,75 stars, but I may simply be in a generous mood. Maybe because the last thing I've read was "Own the wind", that was so disappointing, left such a bad after-taste in my brain that an hour after finishing it, I just had to grab something else to recover. So there is a chance of updated review later.

"Heart on a Chain" didn't have any of the major flaws that put me off lately.

A book about love and abuse. Yes, I like my share of drama with a big, fat happy end. Sue me. Therefore the book had a potential from the get go.

Review:
- Starting with a nicely balanced story. It has some set up in the past and there are some flash backs to explain things, but they are few and far between. They are components of the story, they fit, nothing is forced. The book isn't blindly focused on how much characters loooove each other. Or on dramatics for that matter. It is an effortless read.

- Descriptions - I don't remember them at all, which means they were good. Just like a great film music doesn't pull you out of the film, but rather enhances it without you noticing it, same goes for descriptions. Enough said.

- not overly sexual relationship. (arguably too little) But the point is in so many books out there the focus is on the looks of characters. How sexy their legs/ass/hands/boobs/hips/neck/lips/eyes/lashes/hair/etc. are. Not here. No useless focus on clothing either. Nice to read a book in which you don't have to know every single detail about every outfit. How refreshing. Any mentioning of the above served a purpose, build the atmosphere, told us something about the characters and their situation In other words: served a story, not the other way around. It could be argued, that characters that age would eventually do more than just kiss, but I'm willing to let that slide.

- Realism of abuse. By that I mean that protagonist doesn't have a split personality, where on one page she is traumatized, and on the other goes to parties or flirts or does any other improbable things (and I don't mean acting out). The bulling at school might be an overkill, but it is a plausible scenario. It happens, it is always unfair, unnecessary, excessive, cruel and perpetuating. Children are cruel. Add to that pack mentality... Yep, totally plausible (unfortunately)

- secondary characters are awesome. Not cardboard cut-outs. Even villains are not excessively in your face. They aren't cartoonish and forced. Everybody seems quite real. And author doesn't try to introduce too many characters either.

- not a bad boy. I'm done with tortured bad boys with "golden" hearts, that are just sexy assholes/stalkers/violent psychos. It's a normal nice boy. And he isn't a god of sex with eight-pack. Just normal, handsome boy. Makes me want to hug the author.


- despite characters being in last year of high school they are more mature than many supposedly collage kids in other books. I'm so tired of those overly excitable, loud (yes, even thou it's a book their obnoxious personalities seem to explode in your brain) one dimensional excuses of friends /other high school kids/ protagonists themselves. Again, it wasn't Hanna Montana, it seemed more like life. No tacky comic relief here.

Review is getting long, so I'll try to sum it up. Why 3,5 stars? Because it was too short. Protagonists have history, they went together to elementary school, and so on, but I would like to SEE more of their interactions in the "now". We know they walk/ride together to school, for example, but are rarely shown what they do/say on the way. In other words not enough exposition of their developing and changing relationship. Adding it would make a book longer, but it was short, so it wouldn't hurt. A few more normal, everyday dialogues showing they work together. They like each other. I'd like to be shown more, told less. That's my main gripe.

Still that book is a solid. It managed to avoid big common sins of YA romances of today. It had a nice peace and balance. That is so rare it makes me want to cry out of happiness (lately I've been tormented with books that are severely lacking in one way or another).