The Rose and the Thorn (The Riyria Chronicles, #2) 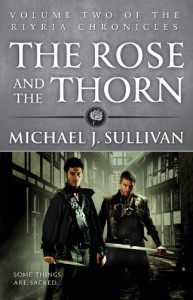 Word count: about 140 000 (just a very rough estimate)
Rating: “The body of a man hung from the statue. Horribly mutilated, the corpse had been strung up by ropes and decorated in macabre fashion with candles.”

Structure, this review should have one. Right. Nope, not happening. Hectic thoughts assemble!

It’s hard to describe how I feel, because that would mean starting a review by talking about the ending, and that could confuse people. Oh, well. You’ll live.

I’m beginning to believe Sullivan is addicted to spicing things up at the end of each book. He just can’t give you a nice resolution. Well, he gives one, but also ads incredibly exciting details that make me particularly toxic to cats, due to potential leaking of curiosity to which they seem to have such averse reaction. Second Sullivan’s book I read, and at the end once again we’re witnessing a secretive conversation that ads olive to embers turning them into a blazing flame. Just saying. It makes you want to immediately grab next book and find out more. And it’s not something random and irrelevant stacked on. Oh no. It’s very much a part of what was before. A unique insight.

Nice thing about both books was presence of side characters that are well constructed and have you emotionally invested. I’m not sure how many of them we’ll meet again, but I want to see them ALL. Yes, I get easily attached to characters, especially if they are interesting.

In both first and second part of Riyria Chronicles we get to follow action from more than one vantage point. Quite often such changes can be irritating, because we either like one storyline and find the other a necessary boredom-fest; or we get so into things, that by the time we go back to the other plotline, we don’t really want to read it, and that happens after Every. Single. Chapter. In this case we’re I was (once again) totally into both plotlines.

This time around plot was a bit less predictable. People die, which made me unsure of how things would unfold. In the end I was satisfied with the outcome. It wasn’t all sunshine and rainbows, but it’s not Father Goriot kind of dramatic. Good.

Our beloved characters made mistakes. Yes, they still are amazingly good in, well, things that they’re good at, but things aren’t easy. I like how we see here, that killing a person might not solve all your problems (not because it’s morally wrong, but because every action has a reaction). Sometimes in books heroes joyfully go about slaughtering people and nobody seems to care. Here dead bodies have potential to be a problem. And, naturally, can be swept under the carpet for someone’s convenience.

We still get a wonderful dose of good and bad people. Even though we begin to have sympathies and figure out who’s who, there’s never 100% certainty (aka ‘have I figured out who all treacherous scumbags are?’ syndrome). That’s good. That keeps you interested.

Some criticism? Yes, I can do that. I’m great at pointing out all the little things. Just ask my boyfri… Aaaaand he’s gone.

There are new characters introduced, and a lot of focus is on them, which means we actually don’t get to see a lot of Hadrian (I can’t stop thinking about the 14th emperor of Roman Empire - Caesar Publius Aelius Traianus Hadrianus Buccellanus Augustus) and Royce (now that one makes me think of cheese –don’t ask why - and cars). I like them, I like them together and that is just not really there. Don’t get me wrong, we do get to see them and learn about them, but their dynamic isn’t explored.

The action had less drive and direction than in the first book, where both plotlines were clearly going somewhere. In this case they’re like two stealthy goats; you think they’re just frolicking here and there until you realize they were slowly moving toward that jar of marmalade. It was like a firework, slowly creeping up on the sky, and suddenly BAM! A short burst of ‘OMG, it’s all happening at once!’ and then it’s gone and you’re left in a cold and marmalade-less darkness (but hey, you can still eat the goats!)

I also really love humour in books and in this one there isn’t much of it (am I nitpicking? Well, I need to do something!)So if you're looking for a good laugh, go somewhere else.

Generally I've enjoyed this book. In the words of Jeremy Jahns "It's a good time, no alcohol required"

This was never the way I planned
Not my intention
I got so brave, drink in hand (green tea, admittedly)
Lost my discretion
It's not what, I'm used to
Just wanna try you out
I'm curious for you
Caught my attention