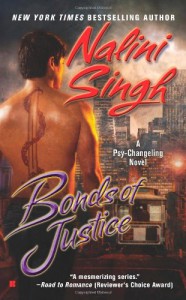 Word count: about 100 000
Rating: Finished it like a cheesecake.

FUCKING AWESOME There. I admit it.

I am pretty impressed with both characters and the development of the elements outside of the main plot.

Female lead: Sophia
A very likable heroine. She has a heart in the right place, amazing strength of will, knows who she is and what she wants. She doesn’t whine all the time about how difficult life is (and trust me, she had enough of hardship). She doesn’t cower whimpering in the corner, because she just can’t deal with all the pressure. The very nature of her abilities dooms her, and yet she refuses to give in, to lose herself. Even when there seem to be no way out, her future unavoidable, she manages to live life to the fullest and makes the most of what she has. She does what she can when she can and doesn’t apologize for it. You’ve got to love her.

Of course she has her fears and weaknesses, but she deals with them (unlike some people that have their heads so far up their own asses all they see their own shit). I LOVE her. She has literally no way out and doesn’t let it break her, doesn’t even consider suicide to escape rehabilitation. A gutsy woman.

Male lead: Max
I fell in love with Max in ”Main to Possess”. Now he’s back and we get to know him better, and boy, it’s totally worth it. He’s a first real human character in the series. Dev was a descendant of the Forgotten, so he doesn’t count (same with Talin). The first that doesn’t have any special powers, just his intelligence and physical strength he had to work on all his life. I love his moral integrity. At the same time he’s a realist (unlike Eddard Stark from Game of Thrones, who’s been honourable to a fault). He knows how things work, and yet he decides to stick to his own rules and do his utmost best whenever possible. He doesn’t run from all those bad, corrupt people; he stays and plays the game without giving in, making most of it.

I admit, their love was quick, but not annoying. At first she sparked his interest with one sentence that didn’t fit the cold Psy image. Then he gradually wanted to know more. It worked. There also is a good reason for them to make the most of the time they have, so I will not blame them for a quick progress in their relationship. They work together on a case; that sort of thing tends to bring people together fast. He pursues her, she wants it, and they both play the game and get closer.

I’ve loved how Sophie wanted to take that leap into the unknown, but at the same time felt utterly out of depth. I’ve loved how emotionally vulnerable her new relationship made her. She never had that type of connection with anyone and was heartbreakingly unsure, waiting to be turned down, but still pushed forward with dignity. She didn’t beg, cry, whimper, and emotionally blackmail the man or blame him for her hurt feelings. She said/did what she wanted to, and waited for the reaction while willing to accept rejection. I loved her honesty, how she was willing to make herself vulnerable by showing her true feelings, shearing her insecurities and fears with Max. I believe that is what brought them together so quickly. They were both very honest about what they wanted while keeping the other person’s well-being in the highest esteem. There was no reckless selfishness or selfish recklessness for that matter. It was beautiful (and I rarely use that word while talking about relationships).

Add to that pretty amazing shit going down outside of the dealings of MC’s. Freaking mind blown! Nikita in that book, OMG. It’s happening. Oh yeah. Quite a lot of important things goes down.

The ending was just awesome! I’ve been waiting so long for something like that to happen! Max and Sophie don’t give in, they make their own way, and they work hard for their place in the world and are willing to do what’s necessary to get there.

To sum up – happy, happy times. After the annoyance of Katya and Dev I didn’t expect much and bam! Sucker punch right in the face.